I make all sorts of Art

My name is Valentine Mark Herman, otherwise known
as Val Herman — except in France, where I am known
as Mark Herman.

I am a self-taught Conceptual/Contemporary Artist,
Photographer and Writer, and l have been living in
Sigean in the south of France since 2002.

I am an exhibitionist (in the sense that those clever. Oxford people in the dictionary business define it as‘behaving in a way to make people notice or admire you’), and have held over 45 solo exhibitions, and participated in a further 45 joint or collective exhibitions. Most of my exhibitions have been in Sigean and in the south of France, and I have also exhibited in the Netherlands, Spain, the UK and Denmark. 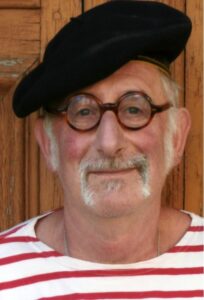 I have written 35 books, of which 15 are about my art and are available on Amazon.

I produce all kind of Art 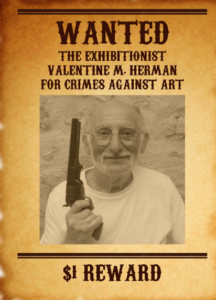 I am also the Founder, President, Boss, and sole member of the Sigean Institute of/de Franglais, and give occasional talks on –  and very often in – Franglais and life after Brexit.

Basically, if I already have or can find something at a flea market/vide grenier, I can turn it into one form of art or another.

My collages are simple works of art made from pictures, paintings, newspaper clippings, photos, stamps, coins, flags, beads, wool and other bits and pieces that enhance the visual impact of my creations. They are mainly paper collages, but sometimes they include other materials such as fabric, hair or a vinyl record.

It might be more accurate to call my collages ‘decoupages’, ‘photo montages’ or even ‘assemblages’. They are made with what the French call ‘collé’, i.e. glue.

I am a traditional collagist: I use glue, paper, pen, scissors, ink, a cutting knife and the same sort of tools and techniques that were used when collage became part of the modern art movement in the first part of the 20th century. (I am not now, never have been, and never will be, a digital collagist.)

Each of my collages is usually based on a single theme in which I bring together a number of different images and present them in a unique way. Each tells a story. And perhaps each conveys a message. 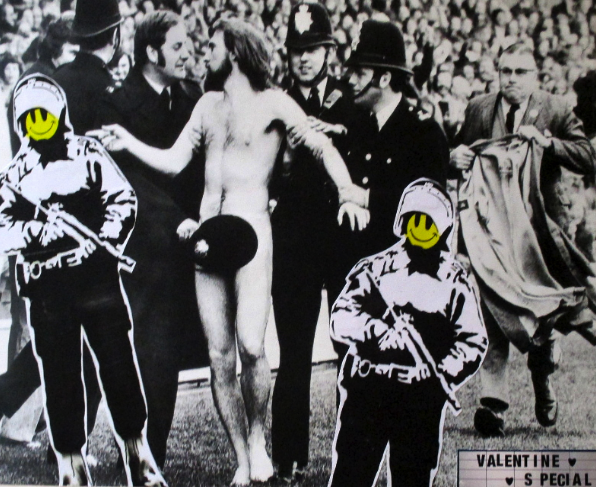 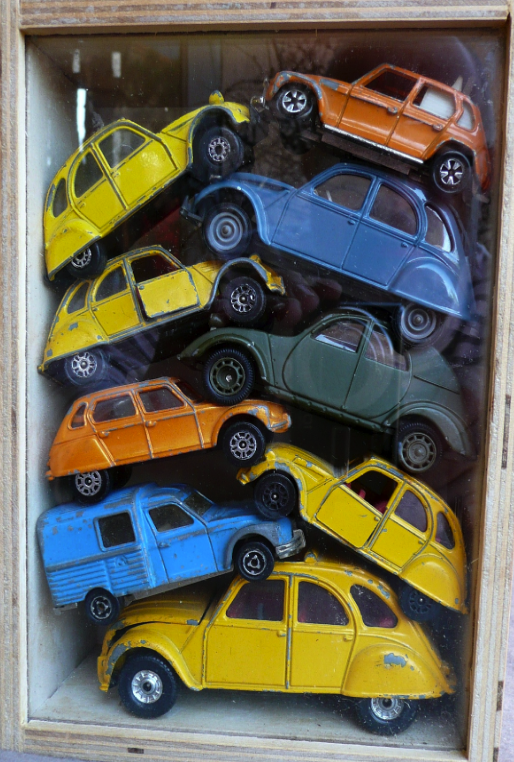 My ‘Mixed Media Assemblages’ (or ‘Found Art’ from
the French ‘objet trouvé’) incorporate a wide range of
materials and objects including disassembled clocks,
bird cages, Playmobile figures, drift wood, dice, toys,
feathers, cigarette packets, cigar boxes, and anything
else that I have found at home, or in junk shops and flea markets.

In summer I spend a lot of time combing the local beaches at Port-la-Nouvelle (which is very close to where I live) looking for driftwood, shells and stones, as well as other objects that have been washed up.,My main ‘find’ has been driftwood, and in numerous pieces of this I have discovered ‘Sea Monsters’ and their faces.

On looking closely at the various piles of washed-up driftwood I began to see faces of what I have called ‘Sea Monsters’; I have discovered and photographed over 200 of these Monsters.

I also started collecting and working on interesting pieces of driftwood – well pieces that I could carry as some of them weighed hundreds of kilos. I brought these home and painted them in bright colours in a very simple, quasi-Aboriginal-style, mainly using just dots and lines. The flow, lines and texture of each piece of driftwood generally dictated the way that I approached it.

I have also painted a series of stones gathered locally and in Brittany.

I have a self- imposed series of ‘rules‘ for my Beach and Driftwood Art:
* only under exceptional circumstances – such as making an assemblage – can pieces of wood be grouped together. The basic principle is one piece equals one Sea Monster, and one piece equals a work of Driftwood Art. And I take them as I find them.
* the driftwood cannot be cut, broken re-shaped etc. It is what it is.
* hings such as a Frisby or a toy can be added to a Sea Monsters, if it is is found on the beach close to the Monster.
* Sea Monsters can be moved – upended, down-ended even, placed in or close to the sea, regrouped, etc – as long as this does not impinge on their basic ‚monsterish‘ nature.

* and the simpler a piece of stone art is, the better. 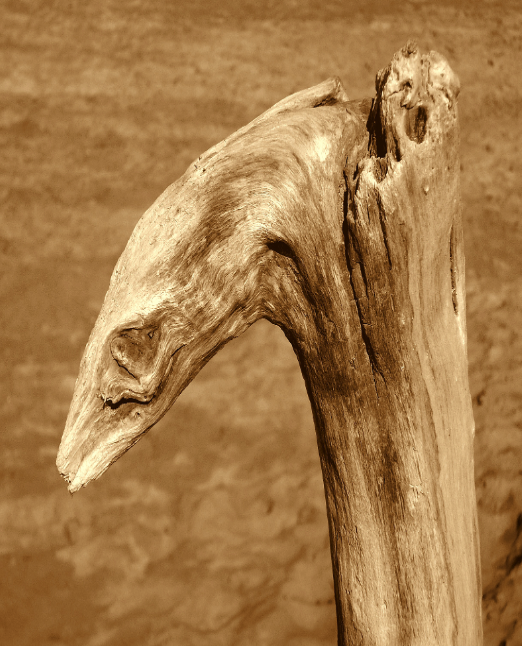 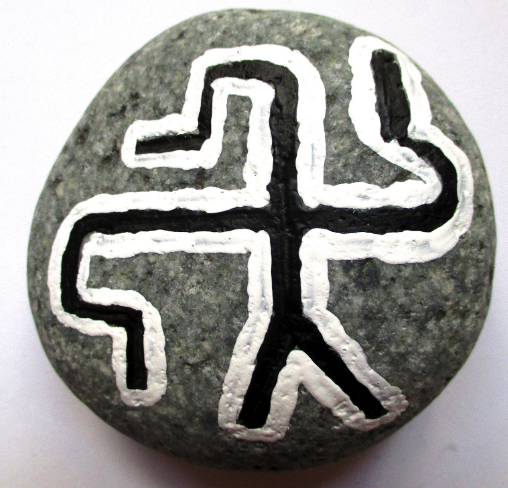 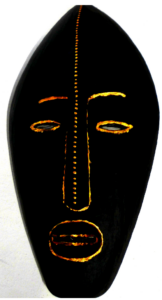 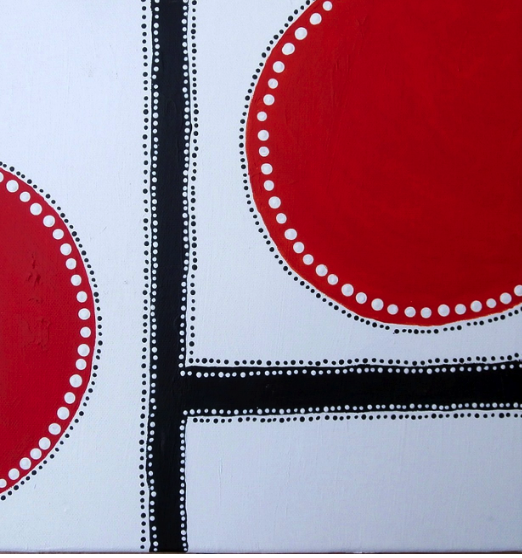 For a long time I have been inspired by Aboriginal art – especially that from the Central (desert) region of Australia – for a number of reasons:

First, because while it is one of the oldest forms of art known (especially in the form of cave paintings), it’s use of colours and designs is amazingly contemporary. Then, because it is truly original, and has remained until more recent years when, out of economic necessity to the Aboriginal people, it became commercial, it has been uninfluenced by modern society. It’s originality is maintained by the geo-political isolation of the Aboriginal artists and their insistence in maintaining their ancient artistic and folk traditions. Next, because it uses a limited but striking range of essentially primary colours. The colours are simple. On first glance, the features – especially those of design and composition – of Aboriginal art look very simple too, but on further examination they can be seen to be extremely intricate.

And then, each Aboriginal painting has a story behind it. The works might look like dots and lines, etc, but they represent, and pass on, important aspects of Aboriginal culture and traditions. They are a visual manifestation of folk lore, and, in the (frequent) interpretations of dreams, wanderings and ‘happenings’, they are amazingly Freudian. Or Freud is amazingly Aboriginal!

Finally, it is the art of survivors — the Aborigines have been hunted, persecuted, murdered, rounded up, abused, moved out of their settlements, had their land stolen, force ably resettled, experienced white man’s diseases (medical and alcoholic), and been subject to many other things – but still they make fine art.
Which I find beautiful!

Ethnic Art – that is the art of ancient traditions and indigenous people – from other regions, especially Central America and Africa also appeals to me, and I have bought and re-worked, as well as copying, many masks and other ethnic artefacts

I have been a member of IUOMA – the International Union of Mail Artists – for over a decade, and have participated in more than 350 international mail art exhibitions in 50 plus countries.  What is ‘Mail Art’?
It is any sort of art that can be sent by (traditionally) ‘snail mail’ or (more recently) email. I send and receive mail art almost daily. My mail box is an ongoing art gallery.
My mail art can be grouped into 3 main categories: stamp, postcard, and envelope art.

I see postage stamps as much more than little pieces of coloured and gummed bits of paper that are stuck on envelopes, parcels, etc. I consider them to be miniature works of art – each design is different, each tells a separate story, each tries to convey a particular message. A sheet or a block of stamps is, to me, a thing of beauty in its repetitive nature, in the way that it multiplies an image seemingly ad infinitum – a form of vibrant Pop Art. I often include stamps in my mail art, and also use them in collages.

Much of the mail art I send and receive is on postcards. They provide an ideal format for a mini work of art – a front side  (usually15 x 10 cms) big enough for a collage, drawing, painting or other creative piece, and a back side big enough for a few words and an address. Historically, the postcard was the precursor of emails, sms-es, and social media. Today they are one of the basic art forms used by the 5,500 members of IUOMA.

Envelopes are another and larger medium of Mail Art. The envelope itself can be the art work, or the contents therein. On 1 September 2010 I started a project called ‘An Envelope a Day’ that lasted a calendar year. Every day, for a year, I mailed myself a different, brightly-coloured, 16.5 square centimetre envelope. On the front of each envelope were different themes, images and configurations of stamps, pictures, posters, paintings and other collage material. And after a year’s worth of work I ended up with 365 pieces of Envelope art that, when laid end-to-end, formed a brightly-coloured mail art mosaic almost 75 metres long. 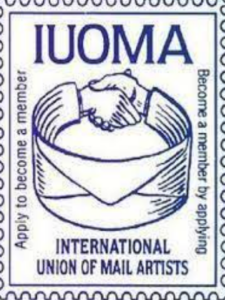 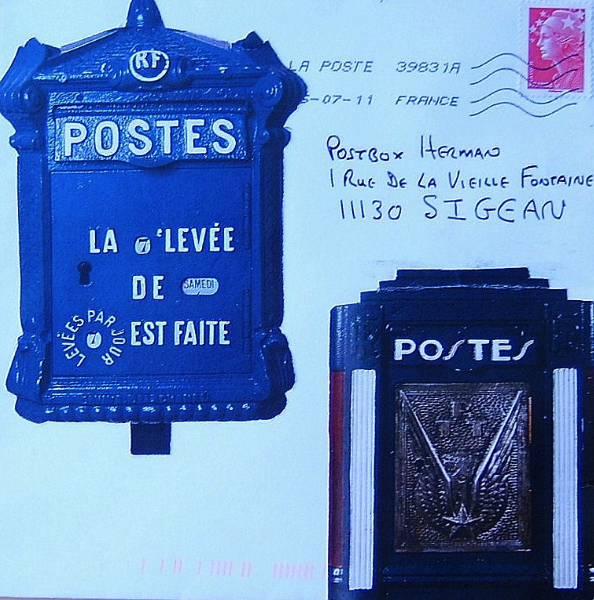 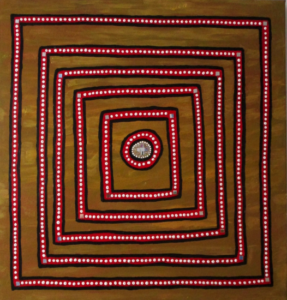 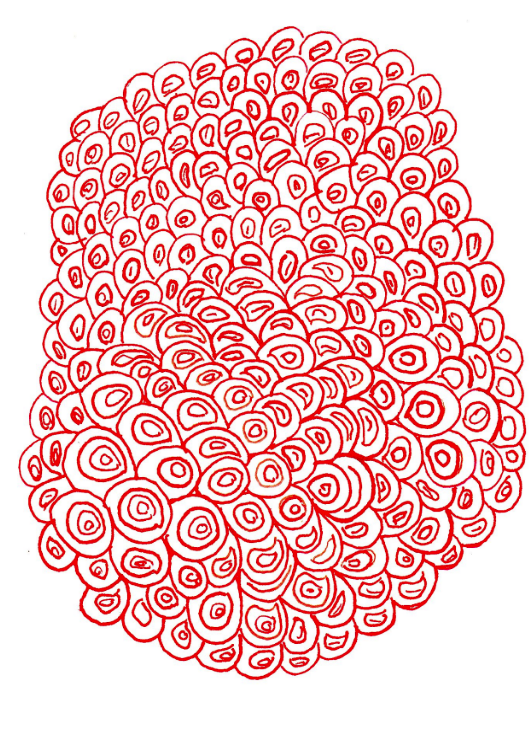 I have painted and drawn many things over the years. Several of my exhibitions have been about paintings – Aboriginal art; flags ancient and modern; pointillism (and rheumatism!); Chinese and Japanese characters; etc.

‘Dotting’ is a time-consuming, fatiguing (after the first five hundred or so dots) and repetitive task. ‘Repetitive’ is important here, as in the summer of 2018, I was diagnosed with a unique form of Repetitive Stress Injury (RSI), namely “Dotter’s Elbow” — I do not know if I made combined medical and artistic history with this diagnosis, but I do know that my elbow was very badly swollen (and painful) and I had to have it operated on, and  spent three days in hospital. The sacrifices I make for my art! ,

My drawings constitute a lesser hazard to my health. They are mostly done in pen and ink, with a limited range of colours (black, red and white, or silver and gold), on 2 sizes (A4 and A3) of black or white paper, and occasionally on what the French call ‘carton mousse’ – a type of shiny plasticy-surfaced writing board.

Shapes, doodles and squiggles are ever present. And I borrow freely from ancient and modern languages, especially Oriental ones.

Over the years, while my art  –especially my collages and assemblages – has become more complex and more ‘plastic’, and my photos have become more experimental, my drawings have remained relatively simple and almost naïve.

Long may they stay that way!

I have about 80 cameras, and usually have one with me all the time. My camera collection includes my first ever camera, a gift from my parents for passing my 11 plus exam. About 45 of my cameras are Polaroids, some over 65 years old. Most of them don’t work, but a few of them do. However, it is practically impossible to get film for them, as original Polaroid films have not been made for 20 or so years, and the unused cartridge packs of original Polaroid film that are available are both very expensive and well past their ‘best use by…’ date. I was a late converter to digital photography, and am not smart enough to have a smart phone with a built-in camera.

My current ‘Urban Landscape’ project –  observing and photographing, in true

French flâneur style, unusual architectural characteristics in Sigean, the village where I live. It involves looking up and looking down, and, generally, looking at familiar things – such as shutters, manhole covers, street lights, religious statues, fountains and door knockers – in a different way to discover some of the neglected aspects of  urban architecture in la France profonde. 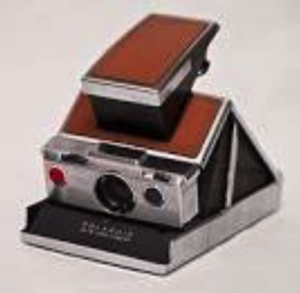 I have had a number of photo exhibitions over the years. Subjects include: